"Let us protect our own - but let us not be seduced by fear and hatred into foolish acts. The stars will never be won by little minds; we must be big as space itself." 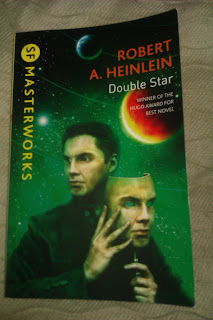 It's not difficult to argue that Robert A. Heinlein was the greatest out of SF's Big Three. Out of him, Asimov and Clarke, only one of them was consistently able to write character and dialogue. He pioneered many of the subgenres and basic ideas of SF, and wrote great stories in the ones he didn't himself help to develop. So why have I read far more Clarke and Asimov than Heinlein? Michael Moorcock nails much of what makes me uncomfortable with the man's work far more eloquently than I ever could here. To illustrate from my experience, last year I read Heinlein's 'Have Spacesuit - Will Travel', one of his classic juveniles. It's a tremendously fun, fast-paced space adventure filled with well-drawn characters, inventive aliens and sound physics. So why didn't I like it? At the end, the Mother-Thing's race kill an entire planet-ful of aliens because they deem them dangerous and aggressive. They then put mankind on trial and decide that humans aren't quite dangerous and aggressive enough to warrant genociding them out of existence. Basically, I find this morally objectionable as well as wildly inconsistent. No one has the right to mete out judgement to other species, or rain down destruction on a less powerful people utterly unable to defend themselves against  you as punishment for aggression. I found the Mother-Thing's people to be smug and hypocritical, yet the narrative and the narrator side with them, and if you have a problem with that, or with the way that the alien aggressors' ugliness is treated as part and parcel of their villainy and why they deserve to be destroyed, Heinlein couldn't care less. Heinlein's strong, uncompromising attitude colours much of his more iconic work - like, say, Starship Troopers, even more so. This is, of course, Heinlein's prerogative and Heinlein's opinion, and I in no way deny his right to it, but it makes much of his work difficult for me to enjoy uncritically.
So imagine my surprise on finding out that 'Double Star' finds Heinlein defending democracy and equality. (Mea cuplua - it's worth remembering that people you disagree with are as capable of complexity as anyone else). The premise of the novel - a sleazy out-of-work actor his hired to impersonate a politician - could be horrifically cynical, but it actually turns out to be the opposite. True, you have to find a super good reason to justify duping the public, but the book isn't really about that. It's about Lorenzo Smythe's transformation from a xenophobic, selfish and petty man into the genuinely honest, altruistic and thoroughly moral politician Bonforte.
Many of Heinlein's characters are born special. Kip from 'Have Spacesuit - Will Travel' has his fair share of adversity to overcome in the shape of his poor background and unsympathetic surrounding community, but there's no question about his intelligence and courage, even before he discovers he's a kid genius and saves the world. Lorenzo Smythe is a more engaging protagonist because he has to overcome personal issues as well as situational difficulties. As he studies Bonforte through recordings of his life, speeches and beliefs, he comes to understand where the man's moral centre and convictions come from, and to cast of the shackles of his own prejudices. It is Lorenzo, not the real Bonforte, who makes the speech quoted at the top of the page. Like Bonforte, he comes to realise that in order to reach the stars, humanity is going to have to overcome its petty prejudices, and that it is imperative that humanity not turn the stars into yet another empire run on exploitation and human privilege.
Heinlein's gift with characterisation and dialogue is in full swing here. The novel is told in first person from Lorenzo's point of view, and his crude, sarcastic and cynical voice is frequently hilarious and ultimately a very canny instrument with which to tell this particular story. His transformation is handled deftly and subtlety as his character changes and he adopts more and more of Bonforte's dignified tone. 'Double Star' is as breezy, fun and engaging as 'Have Spacesuit - Will Travel', but not only do I find its outlook more palatable, it is also an excellent character study.
Posted by New Puritan at 12:45 No comments:

“I have seen the gears and furious machinery of the world that lies unreckoned beneath our feet. No longer can I note, as other men do, the passing hours upon the heavens’ gilded face, without a vision of a hidden master-spring uncoiling to its final silence. I await the day when all clocks shall stop, including the one that ticks within my breast. Do thou the same, Reader, and profit from my example.” K. W. Jeter coined the term ‘steampunk’, somewhat in jest, to describe the warped alternate history Victorian feel of the books he, James P. Blaylock and Tim Powers were writing. Although the term has since taken on a life of its own, the books they were writing at the time – specifically ‘Homunculus’ and ‘Lord Kelvin’s Machine’ by Blaylock, ‘The Anubis Gates’ and ‘On Stranger Tides’ by Powers and ‘Morlock Night’ and ‘Infernal Devices’ by Jeter – retain a strange alchemical magic that sets them apart from everything that has come under the label since. Indeed, Jeter, Blaylock and Powers remain difficult to classify by any rubric, and despite being the forefathers of the genre all three of them have written a wide range of stories that cannot be so easily classified under steampunk or any other heading. While those core six books are a lot stranger than most steampunk fare, they also contain many of the key elements of the genre, most prominently the recognisable but noticeably alien Victorian (or thereabouts) London, and steam technology run amuck. Out of all of them, Jeter’s ‘Infernal Devices’ is the most quintessentially steampunk, and the one that pre-empts so much of what would come later. Despite similar ground being well trod since, the original retains much of its charm, and has enough characteristic Jeter weirdness to still surprise and entertain. Much criticism is justifiably thrown at steampunk that it glamourises the Victorian age whilst ignoring all the exploitation, jingoism and racism that fueled the British Empire. However, the original works by Jeter, Power and Blaylock avoid this pitfall due to their focus on poor, down and out and disenfranchised characters and their healthy cynicism towards the upper classes.
‘Infernal Devices’ is a rollicking adventure story about George Dower, the very normal son of a genius clockmaker and inventor, who manages to gets swept up in a plot to destroy the world, shenanigans with a clockwork double and petty criminals who can see the future, human-fish hybrids straight out of H. P. Lovecraft’s ‘The Shadow Out Of Innsmouth’, and an attempt to save a dying race of selkies. It’s written in convincing mock-Victorian style. Yet the reason it succeeds so well is because it questions the assumptions of the time it emulates. George Dower, our viewpoint character, maybe a model level-headed and morally upright English citizen, but he is almost Bertie Wooster-ish in his bumbling incompetence. He spends the whole book being manipulated by more savvy characters, and only really figures out what’s going on right at the end. The only lord in the book, Lord Bendray, is a dangerous lunatic bent on destroying the world, while the only other upperclass character is a well-intentioned extremist who spends most of the book trying to kill Dower for the greater good. Dower’s most trustworthy (well, it’s a relative term) companions wind up being a pair of petty criminals. Scape and Miss McThane may be confidence tricksters playing everyone for everything their worth, but they wind up being the most charming characters in the story, and are one of the few people who, for the most part, never wish Dower any harm and team up with him on several occasions. Their modern, slang-heavy speech, learned through hours spent looking into the future, offers a nice counterpoint to Dower’s formal old fashioned style.
Crucially, ‘Infernal Devices’ doesn't shy away from either depicting the ingrained racism of the time or commenting on it. When the Brown Leather Man – actually the sole remaining selkie in an environmental suit – first pays Dower a visit and so sets the plot in motion, Dower’s butler mistakes him for a person of colour and makes some standardly racist assumptions – that the man is there to rob them, and is drunk – and is immediately deflated by Dower, who for all his daftness knows better than to stereotype people.
‘Infernal Devices’ also explores the environmental impact of the industrial age, another thing rarely given consideration in steampunk. The reason for the Brown Leather Man’s villainy is that the entire species of selkies save him have been wiped out because a seaweed harvesting device invented by Dower’s father destroyed their breeding ground. Like the classic scientific romances by H. G. Wells and Jules Verne it emulates – the final chapter is even titled ‘Mr. Dower Sees It Through’ in a blatant shout out and an echo of the same device in ‘Morlock Night’ – ‘Infernal Devices’ warns against science unchecked by morality. Dower senior is the very figure of scientific progress regardless of the cost – the doomsday device he built Lord Bendray actually works because the man was too arrogant to pass off a non-functioning piece of work even when scamming a delusional lord. It is this hubris that allows everything else in the plot, all the other characters’ various schemes, to take place. The old man’s folly is only prevented from destroying the world at the price of his son’s innocence.
Posted by New Puritan at 11:15 No comments:

"I went back and talked myself out of eliminating Jesus Christ."