"That division, I-Justice of Toren and I-One Esk, was not, I have come to think, a sudden split, not an instant before which "I" was one and after which "I" was "we". It was something that had always been possible, always potential. Guarded against. But how did it go from potential to real, incontrovertible, irrevocable?
"On one level the answer is simple - it happened when all of Justice of Toren but me was destroyed. But when I look closer I seem to see cracks everywhere. Did the singing contribute, the thing that made One Esk different from all other units on the ship, indeed in the fleet? Perhaps. Or is anyone's identity a matter of fragments held together by convenient or useful narrative, that in ordinary circumstances never reveals itself as a fiction? Or is it really a fiction?" 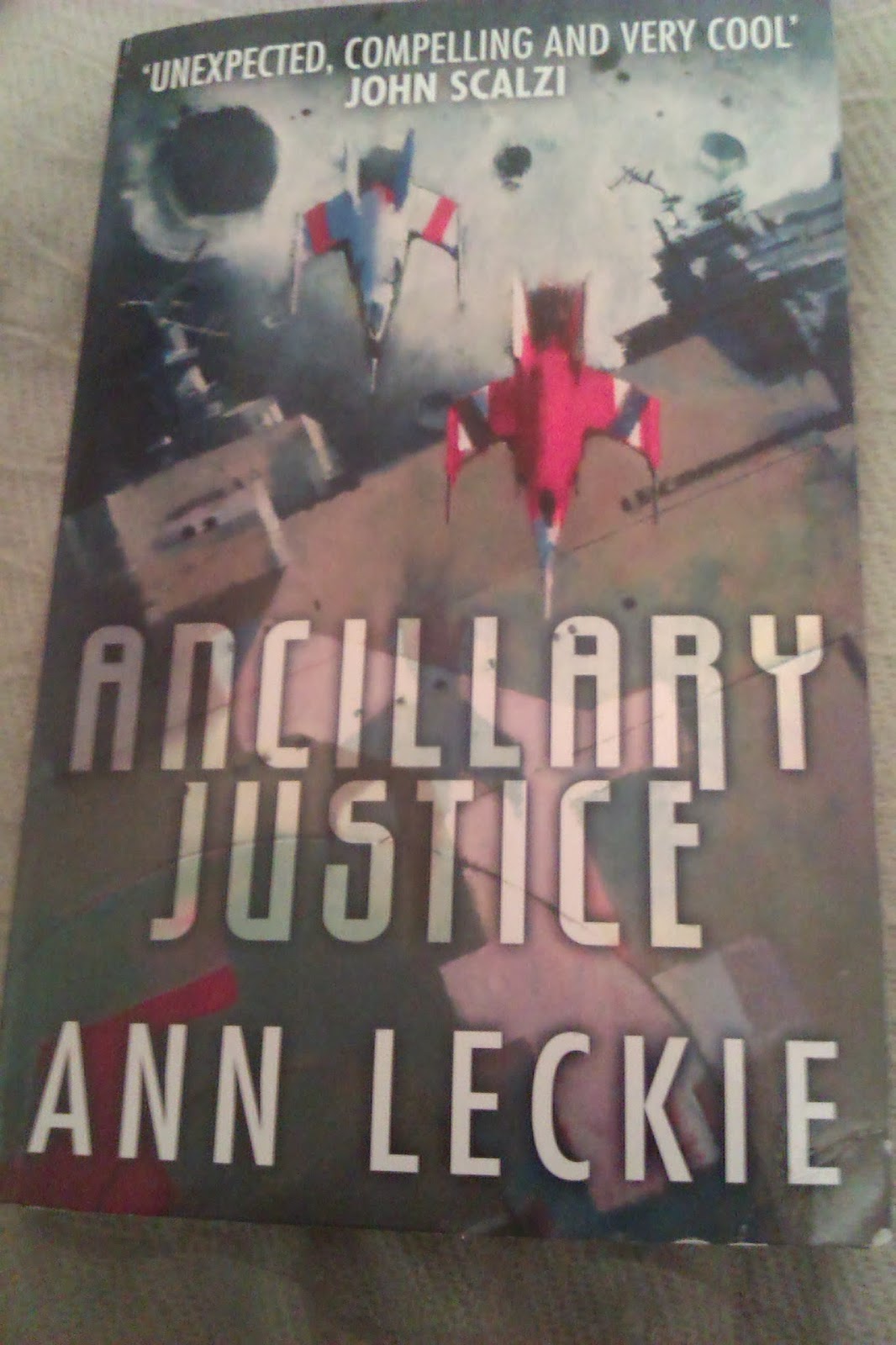 'Ancillary Justice' is a good ol' fashioned space opera, with all the scale and interplanetary trappings that those of us who are fond of the genre miss while we're away. But it's also an uncompromising look at individuality and what that means for hive minds and their component parts, or, on another level, small cogs in a large machine. It's also a nuanced exploration of the legacy left behind by empires as they run out of space to expand into, and of the subjectivity of gender and the cultural assumptions embedded in all of us. Clearly there's a lot going on here. But Ann Leckie manages all of this in a book that's a concise and enjoyable read.
The book follows Breq, who used to be Justice of Toren, a massive interstellar battleship with a hive mind made up of the ship and its ancillaries, AI soldiers made from the zombified corpses of previous battles. Justice of Toren is part of the armed forces of the Radchaai, a powerful interstellar empire much feared by their enemies (read: anyone who happens to be in their way). But an act of betrayal has destroyed the ship and all the other ancillaries, leaving Breq alone to take revenge against the person who took everything from her.
The plot clicks along at a good pace - one strand follows Breq as she goes in search of the MacGuffin that could possibly allow her to take a shot at someone powerful enough to take out a Radchaai ancillary carrier, whilst the other strand shows us how we got here in the first place. 'Ancillary Justice' is the first book of a trilogy, but the ending manages to be satisfying in itself whilst still leaving pieces on the board for the author to play further down the line.
Now, onto the real meat of the novel. 'Ancillary Justice' has an interesting way of dealing with gender. The Radch don't mark gender at all, and use 'she' as the default pronoun. Here Leckie is inverting the standard sexism you get in a lot of genre fiction, and specifically in a lot of golden age space opera, where female characters may as well not exist, or only exist to validate or reward the male lead. However the situation is more complicated than that. It's possible to read this as a story where every character is female, but the Radchaai are still humans who reproduce sexually, and Breq frequently offends people from alien cultures by misgendering people (something that must have a high risk of happening in contact between alien cultures but is dealt with surprisingly rarely in SF). So it's actually possible to read the gender and sexual orientation of the characters in any way the reader pleases; the Radchaai nonessentialism about gender allows them to be fluid and open to interpretation. This very openness allows the reader to reflect about their cultural conditioning surrounding sexuality and gender roles. When Breq returns to Radchaai space after twenty years of exile, we get this wonderful passage:

"I saw them all, suddenly, for just a moment, through non-Radchaai eyes, an eddying crowd of unnervingly ambiguously gendered people. I saw all the features that would mark gender for non-Radchaai - never, to my annoyance and inconvenience, the same way in each place. Short hair or long, worn unbound (trailing down a back, or in a thick, curled nimbus) or bound (braided, pinned tied). Thick-bodied or thin-, faces delicate-featured or coarse-, with cosmetics or none. A profusion of colors that would have been gender-marked in other places. All of this matched randomly with bodies curving at breast and hip or not, bodies that one moment moved in ways various non-Radchaai would call feminine, the next moment masculine. Twenty years of habit overtook me, and for an instant I despaired of choosing the right pronouns, the right terms of address. But I didn't need to do that here. I could drop that worry, a small but annoying weight I had carried all this time. I was home."

However the Radch is far from all sweetness and light. The Interstellar Empire is such a standard trope in SF that we take a lot of its implications for granted. 'Ancillary Justice' takes a good look at some of these assumptions. The Radch is a brutal empire that conquers other worlds and turns a proportion of their population into undead robot slave soldiers. They have used genocide to crush rebellions. If over the course of the novel Breq doesn't quite have a crisis of conscience over her faith in the Radchaai empire - her quest is driven almost entirely for personal vengeance - her favourite officer Lieutenant Awn very much does, as indeed does the Lord of the Radch, Anaander Mianaai. In fact these two very different moral crises - over when is the right time to stand up to power, and over whether or not to commit genocide - together precipitate the destruction of Justice of Toren and set the plot in motion. Mianaai admits that the Radch economy is fueled and sustained by the constant expansion and conquest of new space, and that, having swallowed up all the little fish, the Radch are running out of suitable targets. The book also explores how much the identity of the conqueror becomes embedded in the culture of the people, and how difficult it is to change that mentality. There's a grimly hilarious scene where Breq and Seivarden, a disgraced military officer, are invited to tea by some upper class Radchaai twits who have clearly never been within sniffing distance of fighting as they mouth off on their half baked jingoism.
Which brings us to another thing 'Ancillary Justice' does well - class. The Radchaai have a rigid hierarchy built around the standing of one's house. Members of the upper class are expected to pass their aptitude tests with flying colours and go into high ranking positions in the military, whereas members of the lower classes are expected to keep in their place. Officers like Lieutenant Awn, who come from a working class background, are seen as upstarts who should never have been allowed to pass the aptitude tests in the first place. Leckie realistically portrays the sniping and resentment of Awn's fellow officers, as well as Awn's own frustration at dealing with an intrinsically unfair system that the privileged are unwilling to even acknowledge.
It's worth mentioning that all of this lands as well as it does because Leckie has created memorable and compelling characters. All of the major characters exhibit growth and development over the course of the book, from Lieutenant Awn's tragic realisation that she should have stood up for what was right sooner, to the depth of Lieutenant Skaaiat's feelings for Awn. Seivarden's growth from a snobby, unsympathetic upper class officer to someone who truly cares for and respects Breq and has started to share many of her concerns is particularly compelling. And then we have Breq herself, possibly the most alien character in the book. It is a testament to Leckie's skill that she is able to make her such a compelling and relateable protagonist, even when describing scenes from the point of view of Justice of Toren. I eagerly await book two.
Posted by New Puritan at 16:12