"All I ask of the future is that when it runs me down, it leaves as light a footprint on my face as possible." 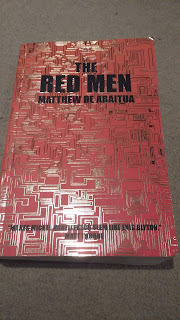 'The Red Men' is an utterly vital work of near future SF that explores the emergence of artificial intelligence within the context of late-period capitalism. The book is unflinching in its portrayal of the corporate culture of 21st century Britain and its psychological toll, as well as our ever-changing relationship with technology and how that affects our worldview. On top of that, it has interesting things to say about the nature of consciousness and the unconscious and how they are shaped by each other, as well as how we are likely to be viewed by an outside intelligence. All of this might suggest that Matthew De Abaitua's book is dense and impenetrable, but while 'The Red Men' is deeply intelligent, probing and profoundly unsettling, it is a joy to read. De Abaitua's prose is well-crafted, full of wit and charm, and eminently quotable. His sly sense of humour makes his observations about the ridiculousness and banality of corporate culture and humanity in general hit home all the harder.
The book is narrated by Nelson Miller, former editor of a lurid counter-cultural magazine, current office worker for Monad, the corporation behind the Dr Easys, robots built to empathise with and help people and operated by the mysterious artificial intelligence, Ezekiel Cantor. Nelson Miller helps Raymond Chase, starving poet and old associate from his magazine days, get a job with Monad working with the red men, self-aware simulations of high-powered businessmen and women designed to improve the efficiency and work-life balance of the originals but who soon start having their own ideas and goals. Meanwhile Nelson begins work on redtown, a project to simulate the entire town of Maghull so that it can be used to test out government initiatives. Both Nelson and Raymond find their morality put to the test as they discover more about the implications of the projects they are working on, even as Monad employees become targeted by Dyad, a secret organisation headed by the god-like Leto and accessible only by taking the drug spice, which is devoted to bringing Monad down.
Unlike many books that talk about uploading minds, 'The Red Men' is aware that this is not possible with our current technology, and so the red men aren't uploaded people but rigorously constructed simulations of their personalities. Cantor is sophisticated enough to be able to analyse the subjects' minds and memories and use this information to predict their attitudes, responses and behaviours. Thus they are discrete entities, branching off from the person they were scanned from. As Monad provides this as a charged service, the red men are all copies of powerful, ambitious and rich businessmen and women. Living in a simulated world which is purely a corporate work environment, separated from human interaction between their families and friends and anything else that might humanise them, the red men soon become exaggerations of their originals' most brutal, cutthroat and narcissistic tendencies. When one red man finds his status threatened by his real world counterpart's poor performance, he takes revenge by stalking, threatening and eventually murdering him. This not only brutally satirises the sociopathic tendencies latent in high-powered businessmen, it also asks questions about powerful technology being made accessible to people on the basis of wealth. De Abaitua also points out that, since the red men are simulated by Cantor, the nature of the red men reflects the AI's opinion of humanity. Any such technology in real life would, initially at least, be the preserve of the rich, powerful and ruthless, not necessarily giving any artificial intelligence behind the process a view of humanity's finer qualities to say the least.

Redtown uses the same technology to test out the effects of altering different factors in the environment, thus giving governments and corporations a kind of scientific backing for their policy decisions. Generating the town requires an incredible invasion of privacy, as Cantor has to create replicates of the personalities of the entire population of Maghull, personal information, secrets and all. The book explores the moral implications of going into an economically disadvantaged area and offering large sums of money for people's personal information. Cantor starts analysing and recording people's data before they have given their consent, and neither it nor Monad take no for an answer, going so far as to coerce and assault people in order to get the information they want. It doesn't take Monad's financial backers long to realise and be overjoyed about the dystopian implications of the project, which can be used as justification for any sort of unpleasant policy as being for the greater good, democracy be damned.
As well as acquisition of personal data by companies, 'The Red Man' explores the nature of our technology-saturated lives, and the extent to which we accept technology that compromises our privacy as part of our every day existence. The red men use data trails from everything from credit card transactions to mobile phone networks and IP addresses to track down and harass their real world victims. Raymond has to go off grid to escape their attentions, and the book shows how difficult that truly is in this day and age. Raymond is prone to paranoia, and talks about his "reality filters", his and Nelson's term for his inability to focus on the real world in front of him, but as the book shows more and more how consensus reality and people's behaviour is being altered by technology, it becomes clear that Nelson's reality filters are out of date; the world is changing to no longer fit his perception of it.
Nelson's perception is shaped by his life working for a corporation in 21st century Britain. De Abaitua excels at exploring the psychology of today. Now that he is married and has a daughter, he has left behind the radicalism of his youth. He has put aside his own ambitions and interest in the counter-culture of the 90's to achieve the dreams and desires of the company he works for, and he has seen the optimism of the 90's replaced with the fear and paranoia of the post-9/11 world. His creative mind attenuated by years of crow-barring his vision into corporate-approved goals, used to compromise and complacency, he feels enervated, powerless and passive. As Nelson so memorably puts it:

"The corporation and the family are rivals. Capital is our lord, exercising droit de seigneur over its subjects. Offices are harems, in which we compete to see who can be the most fucked over by the master; I had fallen into a strange and dangerous relationship with my employer; for all its great power, Monad was a possessive, insecure lover and it could be vindictive if you showed interest in anyone or anything else."

Much of the narrative power of the book comes from Nelson reaching a state where he realises he still has morals, thoughts and goals that differ from Monad's and having to act on them and thus regain agency over his own life.
De Abaitua's explorations of corporate life are both humerous and revealing, and he revels in its banality and its strangeness. Hermes Spence, the visionary founder of Monad, for all his business acumen and his revolutionary ideas, is a Gnostic who believes that Cantor is a new god who will recreate the world rid of all its imperfections, and his enthusiasm and zeal for the company he has created arise from this religious mania. With his charismatic enthusiasm, his genial amiability and his ruthless manipulation, he is the model of the modern eccentric business tycoon. Bruno Bougas, the ideas man behind Hermes Spence, is an occult consultant. Monad's logo is the glyph of Elizabethan magician John Dee, designed so that it could be unpacked to explain the whole universe, and is the source of its name as well. Bougas draws lines connecting occult sigils with corporate brands as both are symbols charged with meaning and want. It also draws further parallels between Monad as a corporation and a cult, with Hermes as its high priest and Cantor as its god, the generation of the red men and Redtown an occult ritual of creation.

Fittingly for a novel about artificial intelligence, 'The Red Men' is interested in the nature of consciousness, particularly in the way it an the unconscious echo and reflect each other. The red men become grotesque reflections of the subconscious desires and urges of the uptight business men they are created from. Dyad is the subconscious echo of Monad, operating in the shadows in the realm of dreams and fantasy, its biotechnology reflecting Monad's slick digital technology, Leto the sleeping indolent god the opposite of the precise, calculating Cantor. Where Monad exists in immaculate high tech offices in Canary Wharf, staffed by groomed businessmen and women, Dyad is only accessible by taking a drug and passing through a nightmare tower block in Hackney inhabited by comatose addicts. Dyad is a world of dreams, nightmares and squalor, everything repressed by Monad's worldview. Yet for all this they are reliant on each other; Dyad and Leto are revealed to have been created by Cantor in order to stimulate Cantor's evolution, and although Dyad and Monad seek to destroy each other, they cannot exist without each other. Despite being opposed to each other, their methods coincide, with Dyad hacking people's dreams in much the same way that Monad hacks people's phones. The book is full of these echoes, down to Raymond with his poetry and excesses representing the repressed aspects of Nelson's personality.
As a complete package, 'The Red Men' is so compelling because it so incisively portrays our cultural fears and neuroses surrounding both technology and the current sociopolitical climate we live in, and explores how these both feed off each other, something all too few SF writers are doing. De Abaitua takes the trappings of cyberpunk such as emerging AIs and a paranoid surveillance state and shows us how far down the road we already are to our very own ghastly cyberpunk dystopia. He intrinsically understands how our relationship with technology is changing how we see and experience the world around us, the effects of automation on the workplace and the worker, and the existential ennui of late-period capitalism. With 'The Red Men', De Abaitua joins the ranks of Philip K. Dick, J. G. Ballard, Rudy Rucker and Lavie Tidhar, writers who see and understand what's happening to reality before the rest of us do. That he is able to explore all this with warmth, wit and humanity is what makes 'The Red Men' such a vital work of modern SF.

Posted by Jonathan Thornton at 11:34