"She had accepted the stripe because people like her had no choice: that was the lesson of the Seizure. That was why they called it the Seizure - it was the moment when meaningful choice was taken away from the majority of people, as their labour lost its value, and they could no longer sell their time, so they had to sell emotions, relationships, access to their bodies. It had felt like the end of the world, but it wasn't. Her humiliation was familiar to the men and women who came into her library, first or second generation imigrants fleeing variations of the Seizure in their own country. The Seizure was not an apocalypse but the moment an advancing front had finally caught up with her."

"Your decisions are made six seconds before you are aware of them. What you think of as free will is post-rationalization. You live in the past, James." 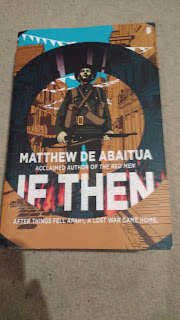 Posted by Jonathan Thornton at 15:14

Email ThisBlogThis!Share to TwitterShare to FacebookShare to Pinterest
Labels: If Then, Matthew De Abaitua, Post-apocalypse, post-cyberpunk, slow apocalypse, The Red Men, the singularity